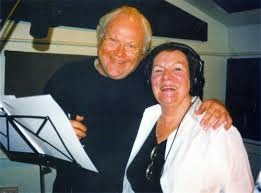 A lot of Doctor Who fans won't know who Maggie Stables was, which is a shame. She played Evelyn Smythe, companion to The Sixth Doctor for Big Finish.

Evelyn Smythe is almost unique in Doctor Who terms. She's not young. She's a University lecturer. A Doctor. Of Philosophy. And she dovetails beautifully with the Sixth Doctor. To the extent that she might actually be THE companion of the Sixth Doctor.

Introduced in The Marian Conspiracy, Evelyn was a spirited, clever and strong woman. She never let the Doctor browbeat her. She lived a good life.

Now I never met Maggie Stables but it seems - reading the tributes to her elsewhere - that she was a woman who enjoyed life and lived it well. Apparently she started acting after a career as a French teacher. She certainly had that tone that teacher's seem to develop that made her ideal casting for Evelyn Smythe.

If you get a chance and you haven't done so already dip into Big Finish's Evelyn Smythe series to see what you missed. You should start at the beginning with The Marian Conspiracy but I'd really recommend The Spectre of Lanyon Moor, which puts the Sixth Doctor and Evelyn in Cornwall. With the Brigadier. It's a lovely story, well-acted and with the comfort of the known in the Brigadier.

But seriously don't miss out.