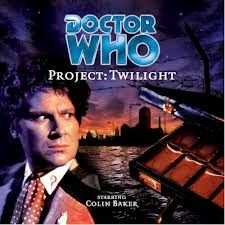 Wow Project : Twilight. That was damn good that. Dark. Violent. Sinister. Packed full of nasty characters doing nasty things and with the Doctor and Evelyn caught up in events and, perhaps, making them worse. Then there's poor Cassie (Rosie Cavaliero) but more about her later.

This story starts off with things going wrong in an experimental facility. As is often the case in Doctor Who scientists are conducting rather unpleasant experiments in the name of creating super-soldiers. Once again the end justifies the means. It's one of Doctor Who's most common themes. The experiment, of course, goes wrong. Or at least they get free.

Which brings us to Bermondsey in the present-ish day. And a trip to a takeaway restaurant for the Doctor and Evelyn that leads to them into trouble. Big trouble. And a casino.

The casino run by the rather unpleasant Reggie Mead (Rob Dixon) and the less - at least on the surface - unpleasant Amelia Doory (Holly de Jong). Reggie in particularly is one of the most unpleasant characters in Doctor Who. A thug. A psychopath. Mad, bad and dangerous to know. In some respects he's not a Doctor Who character at all being anchored in the sort of character that we know from British gangster films (and real life gangsters).

In comparison, even though she's played with style by Holly de Jong, Amelia is a standard Doctor Who villain, although in her way more sympathetic perhaps than most. But, for me, it's Reggie who haunts this story. His torture - and there's no other word for it - of Cassie, even though we only hear its start and its end, is more unpleasant than anything Daleks, Cybermen or Sontarans might have done.

I suppose the word you might use is 'adult'. This is adult drama. This isn't the same as televised Doctor Who at all. You would never be able to broadcast this on television. The BBC wouldn't let you.

And The Doctor's all at sea in this story for a bit too. He's manipulated by Amelia and by Nimrod (a chillingly sinister Rupert Booth). His good nature is taken advantage of and he pushes Evelyn away. She wants to know why he's so concerned about what she sees as a pair of two-bit gangsters but The Doctor knows what they really are and won't - can't - tell her. There's a powerful scene between the two of them as they hammer it out. It's startlingly good stuff from both Colin Baker and Maggie Stables. But it always feels like the Doctor is out of step throughout. It's as if he knows he's not in Doctor Who but has stumbled into sf tinged version of The Krays.

Nimrod's another dark and horrid little bastard. He's hard to separate from the theoretical villains of this story. In fact you might argue that he is the villain. There's so many shades of grey here that he's almost a shadow.

Then there's poor Cassie. God, is there a character in any other Doctor Who story that is put through it quite as much as her. Tortured, wounded and caught in the middle of events she has no understanding of and yet she keeps herself from becoming something dark. She's not safe. Never that but she does have a strong moral centre. It's absolutely heart-breaking to hear her journey.

And at the centre of this we come back to questions of responsibility. Whose fault is all this? How much of it is the Doctor's fault? He's certainly slow on the uptake here. Tricked perhaps, but too slow to see what's going on. It's a bad night for the Doctor, even if there is a kind of victory at the end. The worst consequences are avoided but a price has to be paid. And the Doctor certainly seems to feel responsible. Unusually he even finds to for apologies.

Then this story ends but you get the feeling that this is just the beginning of something. There are too many loose ends. Too much left to do.

This is dark stuff. But its good. It makes Torchwood's pretensions of 'adult' themes look the adolescent fantasies they (mostly) were.