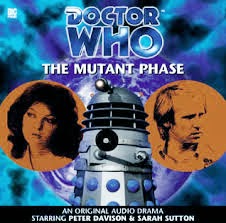 The Mutant Phase begins with Thals. Thals examining the wreckage of planet after planet. Then, out of the nothingness comes a swarm of somethings, travelling at tremendous speed and with not a moments interest in the Thal ship. However in its wake the Thals are dragged through space and they end up drifting above a planet. A planet they should know well : Skaro.

And so it begins.

The Mutant Phase is a story about time, about biology and about The Doctor's relationship with the Daleks.

The Doctor and Nyssa's story begins with a bump in the time vortex, a Time Corridor and their arrival in a Kansas field. It's not long before things start to get complicated. They discover a body, Nyssa gets stung by a wasp and it dawns on the Doctor that he might have turned up in the wrong place at the wrong time. Their attempts to flee just drag them back into the time corridor. The Doctor, having escaped it once, tries again.

I enjoyed The Mutant Phase, which I thought had an interesting premise at its heart, some fine performances, particularly Christopher Blake as Professor Ptolem and Jared Morgan as Commander Ganatus, the two Thals who find themselves working with the Doctor to deal with a problem that might end everything, everywhere.

There's also a rather wierd bunker where a handful of human survivors lurk on a Earth wrecked by 'the things'. Earth is important in this story. Very important. But we meet Albert (Andrew Ryan), Delores (Sara Wakefield) and Professor Karl Hendryk (Mark Gatiss) who all seem rather nice. Odd. But nice. This being Doctor Who, of course, nothing is as simple as that. Things are complicated.

The best thing about this story is that the Doctor is teamed up with just Nyssa again, which gives them both a chance to shine. Nyssa is - alongside Turlough - the companion that best works with the Fifth Doctor - despite all the material shipped out there involving Tegan and the Fifth Doctor. In some respects her smartness reflects that of Elizabeth Shaw and you wonder if that is a reason she gets shoved to the back of stories so often. Or just because The Fifth Doctor had so many companions.

Whatever the reason Sarah Sutton does a great job with Nyssa in this story. Refusing to be fobbed off by the Doctor's attempts to explain the issue of paradoxes and how to avoid them, getting involved with Professor Ptolem in getting to the bottom of the biological issues they're dealing with and just doing the basic companion job of asking questions in a way that doesn't sound too dull. Lovely stuff.

Peter Davison's good in this too. There's something about the Fifth Doctor. He's so calm most of the time. So respectable that when he eventually realises what might be about to happen and tries to get other people to understand he almost appears to be raving like a madman. You see it brilliantly in Snakedance and there are moments here to when he's struggling to get people to understand when it seems to be a similar situation. People don't want to believe him.

I should also pause to acknowledge the wonderful Dalek work by Nicholas Briggs and Alistair Lock. There's a lovely scene involving a Dalek and a Roboman attempting to explain what they had just seen - without spoiling it - that is fantastically well-played and almost makes you feel sorry for one particular Dalek.

So I enjoyed it. Like I almost always do. But I'm not sure it'll go down as a favourite.