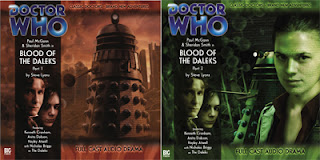 On the unlikely chance that you're reading this blog without any idea of what Big Finish is let me explain. Big Finish make full-cast audio dramas. Usually based on existing fictional properties.

Here I'm going to concentrate on the Doctor Who productions. These feature Doctors from the Classic era of the programme - for now - and their companions. Not all the companions featured in the television series, some are Big Finish only, although Night of the Doctor has made the Eighth Doctor's Big Finish companions canon (if the idea of canon is something you care about.)

There are over 200 releases in the Main Range - which is the Fifth, Six, Seventh and Eighth Doctors. Plus countless other releases from The Fourth Doctor Adventures, Eighth Doctor Adventures (which have slipped out of the Main Range and into a series of their own), Philip Hinchcliffe Presents, Companion Chronicles etc. I haven't even started on the Doctor Who related spin-offs. We're probably talking 500-ish releases.

So where do you start?

Normally I'd say "at the beginning" but - for reasons - I'd say don't do that, particularly if you're dipping in from New Doctor Who. I would start with Blood of the Daleks. This is the first story in the Eighth Doctor & Lucie Miller 'era' aka Paul McGann and Sheridan Smith. I pick this for several reasons. The Eighth Doctor comes with the least amount of television baggage. We've only seen his beginning and his end on television. If there is a Doctor that is Big Finish's it is McGann, although I might argue the Sixth and Seventh are now better represented by Big Finish than their televised adventures. I digress.

Blood of the Daleks is also an entirely fresh start. Lucie Miller is a new companion. It's an ideal stepping off point. Not to mention that it is paced - and feels - like New Doctor Who. So start here and follow the Eighth Doctor and Lucie Miller through.

What then? Well pick a Doctor you like and dip in. I'd almost suggest dipping in to The Companion Chronicles first. With limited casts these cover stories from all eras of Classic Doctor Who from The First onwards, They're among the strongest stories Big Finish have produced and the quality almost never wavers.

The Big Finish website now has a nifty 'Collected' section on its website for each Doctor where their individual adventures are listed in order. I admit to being one of those people that likes to begin at the beginning (and you'll see in other posts on this blog that I've been working my way through from the beginning - again.) So you could do that. Or do it with an individual Doctor.

Or pick an adventure with a monster you like. Big Finish do exceptional Dalek and Cyberman stories. Particularly the Cyberman stories. I'm going to stick my neck out here and say that Big finish do Cybermen better than the BBC do. So go for a big Finish Cybermenfest.

As single adventures I'd recommend The Spectre of Lanyon Moor, which is the Sixth Doctor and Evelyn Smythe (the first Big Finish only companion) and an old friend of the Doctor. The Sixth Doctor is a revelation on Big Finish - unless like me you always had a soft spot for his televised adventures. Finally Colin Baker gets to be The Doctor he never really got the chance to be on television. The Spectre of Lanyon Moor though is a lovely taster of Big Finish's approach to Classic Doctors. If you like that you'll probably like Big Finish in the future.

This though is but the tip of an iceberg but you have to start somewhere. I think every Doctor Who fan should, at least, dip into Big Finish. They've breathed fresh life into Classic Doctor Who. Some of their stories are amongst the best Doctor Who full stop: I'd mention The Natural History of Fear here (but wouldn't necessarily start with that story for reasons of its strangeness. The same with Scherzo. Save them for later.

Where was I...ah yes....Listen to Big Finish. Once you've started - with Blood of the Daleks if you listen to my advice (or not) - then you can enjoy making your own journey through Big Finish. There's a lot to listen to.