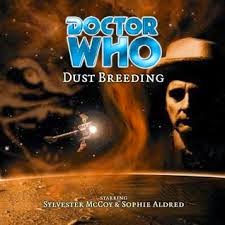 Dust Breeding is almost a story about an immovable object meeting an unstoppable force, but not quite. It's has a suitably barmy premise involving sentient weaponry, art and unstoppable killer monsters, which makes it quite endearing.

We begin and end with Edvard Munch's 'The Scream'. We then find ourselves on Duchamp 331 a planetary dustbowl that's home to some fuel supply dumps and an artists colony. And that's pretty much it. A planet which allegedly once swallowed a Dalek saucer and its occupants. But is there something alive in the dust? And what has it got to do with the impending arrival of art dealer Madam Salvadori and her mysterious 'surprise' cruise and what is the artwork that Damien Pierson is creating to surprise her guests? What's it go to do with Mr. Seta and why has a crew member been murdered in a pretty baroque style?

Listening to this also reminded me of the 'dangers' inherent in listening to a lot of stories in a quick run. There are a couple of scenes, involving the Seventh Doctor in a mental battle with an enemy, which seemed a bit similar to those in The Shadow of the Scourge but that probably wouldn't have mattered if I were doing these on release dates because in that time line there's seven months between the stories. For me there's about a week. So that has to be taken into consideration, which is easier said than done sometimes.

Oh and we get to meet Bev Tarrant (Louise Faulkner) again after The Genocide Machine, which would have been released over a year before this in 'real time' so the return might have a little less impact this time. Bev gets to be the second assistant to the Doctor in this story, filling in for Ace when she's indisposed and you do wonder on occasions whether Big Finish were considering making her a permanent addition to the TARDIS crew or not. But perhaps, having already created Evelyn Smythe, they decided to hold off for a bit. Louise Faulkner does a fine job too. Again. I'm guessing here but I'm wondering whether this will be the last time we see Bev.

There's some great performances here. I'm a particular fan of Ian Ricketts's Guthrie, who shows how to bare a grudge. An ordinary bloke who weirdly reminded me of Griffin The Chef from The Enemy of the World. Still ordinary people in Doctor Who can achieve extraordinary things, which Guthrie certainly does.

Caroline John plays Madam Salvadori with a delightfully extravagant accent whose carefully structured plans fall apart quickly and horribly in the face of a rather unpleasant villain. Her loyal assistant Klemp (Mark Donovan) struggles to cope with what he finds himself involved in. They remind me as a slightly less arch version of Kara and Vogel from Resurrection of the Daleks.

Johnson Willis does a fine job of portraying Damien Pierson's descent into artistic madness and beyond.

Sophie Aldred gets to do a lot more shouting than usual as Ace in this story, being driven close to the edge on a couple of occasions but she still *is* Ace, which is remarkable really considering how much time has passed since Survival. The Seventh Doctor and Ace are one of my favourite companion-Doctor relationships in the series history and Big Finish does a fine job of reminding me why.

Which brings me neatly onto Sylvester's performance. He's so good on audio, especially when doing the quiet-powerful bits.

It's also nice work from Geoffrey Beevers as Mr. Seta. Aka The Master. This is the Master's first Big Finish appearance and they've gone with him as the stripped down skeletal version from The Deadly Assassin, which is definitely the more terrifying version. He was the Ainley version but the creature that may or may not be the main threat here strips him back to that version as a punishment - of sorts. Beevers's Master is perfect for Big Finish as the vocal performance is liquid malevolence.

So another excellent Big Finish adventure concludes. Again it isn't mind-blowingly amazing but it definitely has its moments, especially in the final episodes as everything seems to spiral towards doom.

Worth a listen.
Posted by PatientCenturion at 07:11