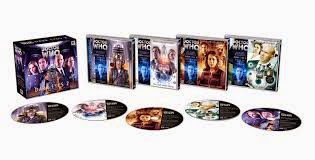 I am reviewing Dark Eyes 2 the same way I reviewed Dark Eyes, which is as if they are one story. This makes even more sense with Dark Eyes 2 in a way as the stories almost form a perfect circle. In the beginning is our end as the poet once said. I shall say no more about this.

The first story The Traitor is a nice feint. It makes you think that the villains of Dark Eyes 2 will be the same villains as Dark but there's more going on here than meets the eye. The planet Nixyce VII is under Dalek control, which means death, Robomen and - at best - slavery. But there is also rebellion. Or collaboration. And we're introduced to Liv Chenka (Nicola Walker) who as a medic seems to be doing the latter. But her life gets much more complicated as she gets dragged into other people's plots: first the resistance and then The Doctor. The Doctor's plan is a bit different to the usual one and as things play out we realise that he is playing a complicated game for big stakes. The story builds to a pleasantly shocking ending.

The White Room is the next story and is probably the weakest of the four. It's got its moments. There's some genuinely creepy stuff and Master Zachery (Adrian Mackinder) is one of the more matter-of-fact unpleasant characters we've met in Doctor Who. A genuinely nasty man and he isn't even the main villain. The story re-introduces Molly (Ruth Bradley) who has been living in the Doctor's house on Baker Street. It's almost the place-holder in the four stories. It's not terrible but by the standards of Dark Eyes 2 it is a little weak.

Time's Horizon is great. Molly and The Doctor arrive on a spaceship that's hovering on the edge of the Universe at the wrong time. But then when does the Doctor ever arrive anywhere NOT at the wrong time. He's astonished to meet Liv Chenka again, although the circumstances are slightly unusual. This story introduces us another set of villains. Another unpleasant species bent on universal conquest. This is one of these stories where we get to see the Doctor as less than trustworthy. Possibly a raving madman. Weirdly it reminded me of Snakedance in that respect. That's not an obvious comparison I know but I quite like it.

Finally in Eyes of the Master we finish Dark Eyes 2 on a high note. It's not a spoiler to say that the Master is involved. [IF YOU'VE NOT LISTENED TO UNIT DOMINION WHAT FOLLOWS IS A WHACKING GREAT SPOILER BTW. IF YOU HAVE OR YOU DON'T CARE PLEASE READ ON] He's in a new incarnation and played by with panache by Alex McQueen. Again The Master might not be quite what you expect. Is he the bad guy? He's aided in his work by Dr Sally Armstrong - who we met briefly in Dark Eyes - who seems to be his 'willing' assistant. Giving the bad boy Time Lords Companions seems to be a thing these days. First the Meddling Monk, now the Master. It's like they all want to be the Doctor. It's a rather good little story this but when you get to the end you are kind of given the impression that this isn't quite as stand alone as it first appears. This is definitely a step along the road to Dark Eyes 3 and Dark Eyes 4. There's a big heffelumping arc going on here that makes The Moff look like a dilettante.

I liked Dark Eyes 2 more than Dark Eyes (for what my opinion is worth) with the exception of The White Room, which was a tad disappointing. I found the way the stories linked together - through The Doctor, Molly, Liv Chenka and the various villains - rather satisfying.

Once more there's a series of excellent performances from various actors of the Big Finish company who play the smaller parts. Sometimes more than one part across the four stories. I feel a bit guilty that I'm not going to list them all, especially as that's just plain laziness but if you want to take a look the cast list can be found here.

Ruth Bradley does a fine job with Molly again but my vote for the two best performances across the quadrilogy - horrible word but it serves - are from Paul McGann and Nicola Walker.

I have praised McGann a lot in this column and he definitely deserves it here. His Doctor gets to be and do pretty much everything you need him to do here. Get the Eighth Doctor back on the telly. Do it now. Although make sure the writer's are Big Finish writers please. They know the Eighth Doctor better than anyone.

Nicola Walker's brilliant as Liv Chenka. The character is strong - and first appeared in Robophobia which is release 149 in the Main Range with the Seventh Doctor at his most manipulative and is well-worth a listen in and of itself - and Walker manages to make her both bitingly sarcastic and exhausted by her responsibilities and experiences. Liv Chenka is one of Doctor Who's more emotionally beaten up characters and I found myself wanting her to join the Doctor as a proper companion. I prefered her to Molly. In fact Molly and Liv are almost precise opposites to each other. Molly is hope and Liv is experience.

So to cut a long blog short(er) I really, really quite enjoyed this. It builds on Dark Eyes and sows the seeds for Dark Eyes 3, which I definitely want to listen to. It's out in November I think. Can't wait.
Posted by PatientCenturion at 10:39