The Fires of Vulcan [The Seventh Doctor + Mel Bush] 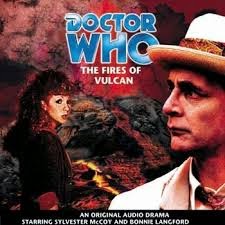 The Fires of Vulcan is rather good, if a little frustrating. Mainly because the Doctor's in an oddly hopeless mood for the first two episodes. It's un-Doctor-ish. It's a bit similar to his mood at the beginning of The Vengeance of Varos and you want to grab hold of him and tell him to buck up his ideas.

It's a good job Mel is here trying to give him the boot up the backside he so richly deserves. Yes, it is Mel Bush. It is Bonnie Langford. The woman whose casting a number of people declare is the reason for the final collapse of Classic Doctor Who. Here's the thing. I think Bonnie Langford got the raw end of a particular unpleasant stick.

Now, don't get me wrong. Mel Bush is not the best or most three dimensional companion we've ever seen in Doctor Who. She's not really much of a character at all except that she's enthusiastic, theatrical and rather too fond of carrot juice.

I don't blame Bonnie Langford for any of that. I blame whoever decided that once they'd cast Bonnie Langford they weren't going to bother to give her anything like a proper character. They'd just get her to be Bonnie Langford the 'showbiz trooper'. Or at least the cliched over-the-top version of Bonnie Langford that everyone seems to accept is the real thing. Perhaps if they'd given the same level of thought to who Mel Bush was that Andrew Cartmel later gave to Ace things would have been a little better.

And to prove that point Bonnie Langford is rather good here. Yes, Mel Bush is still a similar character to the television version but she's toned down a bit, which makes a surprising difference. Indeed in the first two episodes of this story you feel more sympathetic to Mel than to The Doctor. It's rather a surprising thing, based on history.

So hurrah for Bonnie Langford I say.

Sylvester's good in this too. Even when the Doctor's being hopeless. Indeed McCoy does the melancholic Doctor rather beautifully. He'd have made a fine fist of moping about after the Time War had the need arisen.

Oh and I've just realised. I've not said a word about the story. Tut. Tut. This really isn't the best way to run a review based blog is it? But then these really aren't reviews are they. Or not proper English Literature-Critical Theory way.

So where have the Doctor and Mel found themselves. The answer is Pompeii. The day before Volcano Day. It's rather unfortunate timing. Especially as he'll do almost exactly the same thing when in The Fires of Pompeii. In fact I like the idea that on the second day there's another Doctor racing around doing all those Tenth Doctor and Donna things whilst his Seventh incarnation is struggling about already trying to deal with one kind of temporal problem, which I won't spoil. Suffice it to say that said problem is the cause of the Doctor's melancholic temperament.

The Doctor and Mel get involved with various characters throughout. The Doctor offends gladiator Murranus (Steven Wickham) and then spends time avoiding and not avoiding him. Murranus is gruff, grumpy and rather pushy. I suspect being a successful Gladiator does that to a man. He's also not the brightest spark. The Doctor does that offending in the 'bar' of Valeria Hedone (Nicky Goldie), who ends up caught up in the whole Doctor-Murranus 'feud'.

Then there's the fact that the Doctor and Mel's arrival is witnessed by a slave. The Doctor's attempt to blag his way out of it by pretending to be a messenger of the Gods, specifically of Isis aggravates the 'traditional' Roman matriarch Eumachia (Lisa Hollander) who thinks Isis is a base, foreign Goddess that no right-minded Roman should be seen dead in support of. She's determined to prove the Doctor and Mel as fakes, which isn't hard. And she then takes in out on Mel, which leads to her getting imprisoned. As well as involved with the slave girl Aglae (Gemma Bissix), whose trust in and fear of the Gods reminded me a little of Katarina (of The Myth Makers and The Dalek Master Plan fame.) Both Hollander and Bissix put in good performances. Their both examples of the faithful. And of the social set-up of the slave owning Romans.

Mel also attracts the attention of Popidus Celsinus (Andy Coleman). Partly for reasons of Isis - he is a believer in Isis - and partly because he's taken a liking to her. Popidus comes across initially as a bit of an arse, especially as Eumachia runs rings around him, but in the end turns out to be a man of some character and courage.

The Doctor - and Mel - make more of an attempt to save people in this story than the Tenth Doctor does in The Fires of Pompeii, which is nice. Admittedly he doesn't sweep them off in the TARDIS but he does try and get them out of Pompeii, which I like.

The stories ending is almost anti-climatic but actually feels just about right.

Plus there's an appearance by UNIT's Murial Frost, previously of the DWM Comic Strip, which is also rather nice.

To conclude a review rather more rambling than usual this is good and might make you be nice about Bonnie Langford again. Or not.