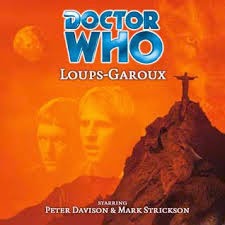 Loups-Garoux is rather good. It's atmospheric. There's some thought gone into the setting and the 'monsters' and its got the Fifth Doctor and Turlough in Brazil. All fine things separately but when combined together something rather excellent pops out of the mix.

It begins in 16th century Cologne where a man is on trial. A man who has stalked and killed in the guise of a wolf. He's a creature of the devil. He's Pieter Stubbe. He will be the Grey One.

Then we are introduced, slowly, to other characters. To Rosa Caiman, the girl with the forest in her head; to Ileana de Santos, the wealthy wife and head of her tribe; to Doctor Hayashi, the man trying to 'save' Ileana's son, Victor and to the Doctor and Turlough who are visiting Rio. This isn't contemporary Rio, this is Rio in 2080. A Rio surround not by rain forest but by desert. It's a world that's changed and that might not have space for the Loups-Garoux anymore. There's an air of a lost world about this whole story. A lost world that might just be savable.

The Loup-Garoux are werewolves. Not the werewolves of Hollywood myth but a race of creatures, of which Pieter Stubbe was the first and oldest. Their origins aren't exactly explained but the Doctor at one point says that mankind didn't exist when Pieter Stubbe stepped out of the mud. He's old is Stubbe. Old, hungry and looking for his mate, who was Illeana de Santos. They met in the snows of Russia in 1812 but she left him. Fled to South America and settled down with a human. They had a son, Victor, but Victor is turning into a wolf and Illeana has hired Doctor Hayashi to help her. But Hayashi has plans of his own. Mainly because he's the kind of idiotic scientist that fills many a-Doctor Who story. Too clever for his own good. And probably doomed to meet a horrible end.

Into this the Doctor steps. Along with Turlough. As usual Turlough is much less keen to get involved and finds himself surprisingly terrified and out of his depth, which is great because if there's something that Mark Strickson can do brilliantly it is Turlough losing it out of shear terror - see Frontios for a fab example of this.

The Doctor's very Fifth Doctor in this. Standing up to everyone. Refusing to judge the Loup-Garoux or condone their destruction, although he finds himself committed to something without realizing quite what he is committing himself to.

There's a streak of romance in this story. The Doctor and Turlough find themselves involved. Not necessarily committed but involved and the final conversation between The Doctor and Ileana is actually rather beautifully written by Marc Platt. It's also performed beautifully by Peter Davison and Eleanor Bron.

Eleanor Bron is the best thing in this. Her Ileana has real weight. Actually weight isn't the right word. Gravitas. She isn't a minor character in a Doctor Who story. This is a character who had a long life before the Doctor turned up and will have one now he's gone. She got an inner life. Or seems to. Which isn't always the case with characters in Doctor Who.

The other character that really shines is Rosa (Sarah Gale) whose the last of her tribe. It's another lovely performance. Full of life. Full of secrets.

The only slight disappointment is the legendary Burt Kwouk as Doctor Hayashi. Not because the performance isn't good but because he's the one character than approaches the bog standard Doctor Who character in the whole story. Everyone else seems so unique that he just appears a bit flat in comparison.

But that's really just a quibble. This is excellent stuff. Give it a listen.