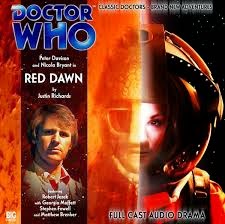 Red Dawn is rather good. It take a while to heat up.* The first episode in particularly being packed full of talking and exposition a-go-go as we find ourselves following two stories: The Doctor and Peri have landed in a mysterious building and have no idea where they are. Meanwhile we are aboard the Ares, containing man's first mission to Mars.

The crew are Pilot Susan Roberts (Maureen Oakley), Commander Lee Forbes (Robert Jezek), Paul Webster (Stephen Fewell) and Tanya Webster (Georgia Moffat). Two NASA astronauts and the Websters. The Websters are the money. Or at least Paul's father is. This Mars landing is a private-public initiative. And, of course, that makes things a little complicated. Or it will do. The scenes aboard the Mars lander sound spectacularly realistic by the standards of Apollo 13 etc. It's rather well done.

Everyone meets up eventually. The Doctor and Peri from inside out and Forbes and Roberts from outside in. I hope that makes sense. Then they stumble upon the central part of the structure, which it turns out is a Tomb. An Ice Warrior tomb. The Doctor is surprisingly slow on the uptake this time as it takes almost until the Ice Warriors are standing on his feet for him to realise what's going on. Bad Doctor.

The Ice Warriors are brilliantly portrayed in this story, especially Matthew Brenher's Lord Zzaal. They're not stupid. They're clever, honourable and very, very dangerous. These are the kind of Ice Warriors I'd like to see in the television series.

This story is definitely about honour. The honour of the Ice Warriors against the honour of humanity (and the Doctor). It's about how honour isn't just an abstract code written down on stone tablets but a living, breathing way of life. It's also about how mankind might deal with first contact. There's reference to the real-life Brookings Report, which outlines how NASA missions should deal with evidence of alien existence and much talk towards the end of maturity and diplomacy.

It is quite wordy. There's a limited amount of action. Not much in the way of chases. There's an idiotic man with a plan, which in the way of all these things he continues to pursue in the face of mounting evidence that he's going to end up dead. There comes a point with these people where you have to just assume they're barking mad because there is no other explanation for their baffling refusal to face up to their inability to deal with the real world. Or the real Mars should I say. I found myself getting genuinely quite frustrated with the insane muppet. I was really, really looking forward to his comeuppance.

The fact that this comeuppance came as the result of an act of marvelous courage was even more glorious. I was actually genuinely quite moved as it became clear what was about to happen, which as I was walking along the Cricklewood Broadway at the time is a little embarrassing.

There's lots of good performances throughout but applause are particularly due to Matthew Brenher's Lord Zzaal and Hylton Collins as Sub-Commander Sstast: the teacher and the pupil as they might be called. Georgia Moffat does a fine job too with her part, which requires her to be slightly confused and annoyed by most of what's going on. She does that well.

Stephen Fewell is rather good too, especially as he gets progressively more annoying.

Peter Davison's Doctor is very much in Caves of Androzani mode here. His anger, indignation and sarcasm putting the villain's back up on a semi-regular basis. He's lucky not to get killed. Really lucky. But then that's the Doctor all over isn't it.

Nicola Bryant does Peri to perfection too, which reminds you of how short the Fifth Doctor's time with Peri was, which is a shame because they get on so well. Especially in comparison with how the Sixth Doctor and Peri were forced to behave. Ah, what could have been. It's nice to hear them working together again. Peri's brave without being too foolhardy, which is nice. There's even mention of her interest in botany here. Something which was oft forgot by the television series.

So I'd recommend this for the realism - which is an odd word to use when talking about Doctor Who - but most especially for the Ice Warriors.