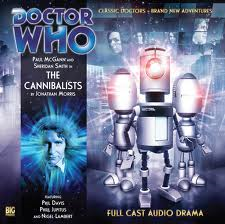 I really enjoyed The Cannibalists, which managed to be what Orbis failed to be: a funny, off-beat story that didn't feel quite like anything else. It helps that it is written by Jonathan Morris, who can manage the balance of seriousness and humour pretty darn well and is becoming not just one of my favourite Big Finish writers but one of my favourite Doctor Who writers full stop.

The vibe of this story tome is less television Doctor Who and more the Doctor Who Weekly Comic Strip. You can imagine this sitting alongside The Iron Legion for example. Titus, for example, is a 'big' character in the best sense and comes bursting out of the speakers courtesy of a mighty performance from Phil Davis, who seems to be channelling Johnny Rotten in robot form.

Which brings me on to another point about this story. The Doctor and Lucie are the only organic characters in it. Everyone else is a robot. Sentient robots mind but robots. The story is set on Haven, where robots are preparing for the eventual return of human beings. Unfortunately something has gone awry and the robots have developed free will and divided into two (or three) classes: the Assemblers, the Cannibalists and...well...Drones. Unfortunately the Assemblers are old, battered and out-dated and the Drones are reduced to just one, last survivor: Servo. The Cannibalists, led by Titus, are about to win.

However there is a possible way out. A big bad re-set button. Find it and the City can be re-booted. But what if it is just a legend? What if I doesn't exist?

Servo is played by Phil Jupitus. Servo too has gone rogue, but in a different way to the Cannibalists. Instead of violence though Servo has taken up writing poetry. One of my favourite bits of the whole play is Servo's little cough before reading one of his poems. That and the joke about Lucie's unorthodox protrusions, which I found amusing.

I have a wee bit of a quibble about the ending, which seemed...well...without giving too much away a little convenient. But it fitted with what had gone before. Plus I guessed the twist well before being twisted, but that's not a massive problem. I could have been wrong. And that I would never have told you in the review so points to me for being a smart arse.

The key thing is it was fun. Fun and funny. With good - if 'big' - performances from the cast in an unusual environment for the Doctor and Lucie. A sort of Web Planet but with robots not insects. The sort of story that, even now, would be impossibly challenging and expensive for the television Doctor Who to attempt. Plus all sorts of people would get sniffy about the jokes.

Give it a listen. It's good fun.