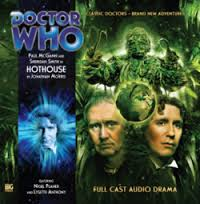 Hothouse is rather entertaining. Written by Jonathan Morris, who is one of my favourite Big Finish writers, it sees a return of the Krynoids via the classic Doctor Who trope: the person who does terrible things in the name of saving the world. The murderer with the best intentions. The person who believes the end justifies the means.

In this case it's ex-rock star Alex Marlowe (Nigel Planer) who has become a environmentalist and determined to save the world from itself. Accordingly he's been fiddling with Krynoids. Actually let me rephrase that. Alex has taken upon himself to experiment with the cuttings taken from the dead Krynoid from The Seeds of Doom by command of the then Head of the World Ecology Bureaux, Sir Colin Thackeray.

In fact the Doctor has been dragged into investigating Marlowe via the World Ecology Bureaux's Hazel Bright (Lysette Anthony). Lucie Miller (Sheridan Smith) has gone undercover. A quick scoot around on an official visit is followed by Lucie's sneaky investigation and it's when she stumbles upon...well...let's just say from that moment onwards it all starts to go horribly wrong.

And now I've stumbled across the 'spoilers' problem. I know this was released back in 2009 but I'm trying to avoid too many obvious spoilers because it - er - spoils the fun: that little twist, that horrible moment, that sudden unexplained frisson of terror. All popped by a throw away line in a review. I've already given away the Krynoids, although I must confess the cover gives it away so I'm feeling a little less than guilty about that.

The thing about the Krynoids - and what makes them truly horrifying in my opinion - is the body horror. The change from human to Krynoid. That loss of ones identity and humanity. It is a death as well as a transmogrification. If our consciousness is eliminated and replaced by that of another being the receptacle we're walking around in is just that:  a receptacle. A fate too horrifying to contemplate.

It's also quite a visual thing so Jonathan Morris does a fine job of making that horror visible through audio with a couple of key scenes, which I won't spoil. In truth as well as being a sequel to The Seeds of Doom, it also reminded me a little of The Ark in Space for reasons that...well...for reasons.

There's some lovely performances here. Nigel Planer gives Marlowe just the right level of pop star self-indulgence manifest as a desire to save the world through what can only be described as 'tough love'. Lysette Anthony does a fine job with Hazel Bright plus there's some nice support - in small-ish parts - from Stuart Crossman as Stefan Radek and Adna Sablyich as Christina Ondrak.

Very enjoyable and the perfect length to get me from home to office.

Paul McGann is doing an excellent job with the Eighth Doctor (still) as he plays a slightly dazed version of himself. Still recovering from the events on Orbis (aren't we all) and still not quite sure about Lucie Miller. I do like the Eighth Doctor on audio. He's rapidly becoming my favourite Doctor.

Sheridan Smith also continues to do a fine job with Lucie Miller. There's so much energy there, even if her Northern bolshiness sometimes skirts the edge of cliché.

A nice bounce after the disappointment of Orbis.