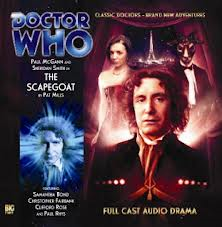 I really enjoyed The Scapegoat even if it was a little...inconsequential. Or was it?

The TARDIS is pulled off-course by a McGuffin and instead of hitting fin-de-siècle Paris and the Moulin Rouge as Lucie expects (and is dressed for) they find themselves in Nazi occupied Paris and with the TARDIS stolen. Just another typical day in the office.

Lucie finds herself appearing onstage at the Theatre des Baroque alongside the 'most assassinated man in Paris' Max Paul (Paul Rhys). It's very funny, especially when Sheriden Smith does Lucie trying to do proper acting. But there's also something rather creepy going on. With the goat headed Doctor Baroque - a rather marvellous and mellifluous Christopher Fairbank - and Mother Baroque - Samantha Bond - clearly up to no goa..good.

Meanwhile The Doctor finds himself in the company of the Gestapo: Major Treptow (Clifford Rose, a man familiar with playing Nazi's) and a nameless Leutnant (Thorston Manderley, which is a wondrous name for an actor). And despite all the hints of menace these are Nazi's of the Indiana Jones school as opposed to the realistic type. They're all bombast, pomposity and stupidity. The Doctor runs rings around them.

In the end this is another story where the villains aren't really villains. The Nazis are, of course, Nazis but they're the side dressing to the Baroques. But the Baroques, with their unpleasant traditions, are less out and out villains and more trapped by ritual and tradition. Even if Mother Baroque turns out to be more zealous - and dogmatic - of the Baroques. If the Wirrn in Wirrn Dawn are creations of nature, then the Baroques and The Scapegoat perhaps stand as a representation of nurture.

Basically it is a rather amusing, rather inconsequential story. Well acted by everyone concerned, especially Sheridan Smith who is on great form throughout. I also like McGann's casual, almost piss-takingly easy escapes from the Gestapo. It's almost as if The Doctor takes them far less seriously than they take themselves. There's a line about the Nazi's not being the worst thing in the universe and it is as if the Doctor is doing his best to prove the point here by turning them into laughing stock.

I often think Doctor Who without humour somewhere isn't quite Doctor Who. The ability to laugh seems to be key to the whole thing. Villains can't laugh at themselves. The crime of taking oneself too seriously is an oft committed one in the Doctor Who universe. And laughter also represents hope: if we're still laughing, we're still here. Victory through mockery. Less survival of the fittest, more survival of the wittiest.

I'm trying not to give too much away but the fate - or potential fate - of Max Paul is movingly outlined but fought against by Lucie, then the Doctor. In fact all waffle aside if this story has a theme it is that you don't have to keep playing the part fate appears to have allocated for you. Losers don't always have to be losers. Victims don't always have to be victims. We can change the universe by changing ourselves. As the Buddha once said, 'Do not ask the world to change. Change yourself.'

On that positive note I'm off to save the world.