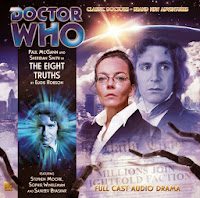 The Eight Truths and Worldwide Web (8TWW) bring the third season of Eighth Doctor to an end. They also mark the end of The Headhunter's (Katarina Olsson) story arc. I have raved about Katarina Olsson's performances before. She's fantastic and The Headhunter is an interesting character, although I found her a little annoying in Orbis but I wonder if that is the story more than the character.

8TWW in fact brings a close to one outstanding thread from Orbis so hopefully I shall never have to mention that story again.

The Doctor and Lucie are on Earth. The Doctor has gone off to help with a dodgy Mercury probe and Lucie is going shopping. It's whilst she's shopping that she bumps into a familiar old face, Karen (Kerry Godliman) associate of the Headhunter or former associate. She's now involved with a organisation helping people to find their true potential. Lucie is entrapped and made to cut herself off from the Doctor.

The scenes around the Eightfold Truth are great. The understanding tone of voice adopted by the people involved, the treacle language of self-help gurus regurgitated and the dash of spiritual frippery all make it rather convincing. I like the fact that the Eightfold Truth is headed by Stephen Moore's Clark Goodman.

Stephen Moore is, of course, best known for being Marvin (The Paranoid Android) in the original Hitch-hikers Guide To The Galaxy Radio Series and there's something about his voice that's both mildly melancholic and mildly comforting. To me at least. And he's a very British choice of Cult leader. No Showbiz Messiah complex here. Just a plain old-fashioned conman.

He's being professionally scoffed at by journalist Kelly Westwood (Sophie Winkleman) who is out to debunk the whole Eightfold Truth Cult. Kelly and the Doctor link up.

However Goodman is being manipulated by someone...and that someone is The Headhunter who is in possession of the Stellar Manipulator she palmed all the way back in Orbis and working for some familiar - well, familiar-ish - Doctor Who foes.

All of this is gradually revealed. The Doctor's story gradually pulls itself towards Lucie's. The Mercury probe, looked after by Dr Avishka Sangakkara (Sanjeev Bashkar), has ceased working and the Doctor's help makes him realise that there's Gallifreyan technology at work here. Then there's the crystals...

The cliffhanger is an excellent on with both Lucie and the Doctor facing dangers of their own. How will our heroes escape? 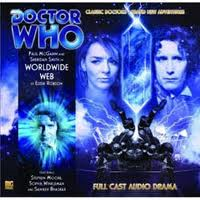 When we start Worldwide Web the Doctor's been in a coma for 28 days. Things have moved on. Plans are afoot. Or afeet one should say. On Eight Legs.
The villains are the Spiders of Metabelis 3 headed up by their Queen (Beth Chalmers). Applause here for Big Finish getting the Spider voices to sound just right. Sorry, the Eight Legs. They so hate being called Spiders.
Lucie has been taken over by the Queen. But lucky for us the baddies think the Doctor is dead, which is rather foolish of them and the strain of the operation - and keeping her minions happy - has allowed Lucie to get out of her own mind. A bit.
The scenes between Lucie Lucie and Queen Lucie are great and Sheriden Smith does a wonderful job of make Queen Lucie perceptibly different to Lucie Lucie by flattening her voice and taking all the warmth out of it. It's rather lovely.
I also like the fact that the Spiders have their arguments too. They're broken into factions and the Queen can't entirely trust everyone. Then there's Goodman, who has realised what he's let loose, and finally Karen who having been 'spidered up' against her will has something of a grudge against the Headhunter.
It's all leading to a rather interesting climax. The Doctor does his thing, Lucie does hers and the Headhunter suprises everyone in a rather brilliant little sequence. The Eighth Doctor's 'I never really understood her' almost being an echo of The Fifth Doctor's 'There should have been another way.' There's some weird stuff inside and around the Stellar Manipulator and some philosophising on what it means to be alive.
This is a fun end to the third season of Lucie Miller and Eighth Doctor adventures. The two leads get to have a lot of fun, various story arcs come to their end and they're off to Blackpool for Christmas. What could possibly go wrong?
﻿
Posted by PatientCenturion at 08:14