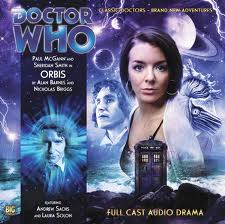 So, let's cut to the chase. I didn't like Orbis much.

Now I've got to work out why. A contributory factor might be that I listened to this on my way home from a long day in the office, on a over-crowded and over-heated tube train. That never improves one's mood but I know from previous experience that a good Big Finish story over-rides that. It draws you in.

Orbis didn't do that.

Was it the setting? A water world occupied by intelligent jellyfish - The Keltans - and menaced by a race of belligerent giant clams - the Molluscari? I don't think so. After all I'm a big fan of The Web Planet, which makes this look positively unambitious, partly because it was on the television.

Was it the performances? No. Not really. The acting was pretty good. I particularly liked Laura Solon's Selta, the jellyfish with a thing for the Doctor. Andrew Sachs did a fine job of Crassostrea, the leader of the Molluscari on the verge of giving birth. Although what a hermaphrodite, giant clam psychopath would actually sound like is a moot point.

But I think talking about the performances sets a little alarm bell ringing about this story: the tone. It's like The Gunfighters. Pretty light-hearted and comedic until Johnny Ringo turns up. Or in the case of this story until the Molluscari land. When it all takes a turn for the unpleasant.

The ending in particular, which is in its way bloody horrible, doesn't feel right. It feels tacked on as if the writer's realised they needed to get the Doctor off of the planet and the only way to do it was to...well force the issue in as unpleasant a way as possible.

And neither does the Doctor's own behaviour. Even allowing for the ending of Vengeance of Morbius would the Doctor really just settle down in such a way that with his TARDIS back, Lucie back and his memory back (which he seems to have lost in dribs and drabs over time) he wouldn't try to do something more than stay and die with the Keltans?

This is the Doctor we're talking about. A man who jibbed at being stuck on Earth for two years but is apparently happy to sit on Orbis for a lot longer than that as happy as a sand boy? That he wouldn't strain every sinew to escape. To get back to his TARDIS. Back to Lucie? Nah, it just doesn't ring true.

And then there's the bloody Headhunter. Back again. Up to her old tricks. I don't know why but I'm beginning to find the Headhunter a little tiresome. Nothing to do with Katarina Olsson's performance, which is perfect. More to do with the character. Here she is inside the Doctor's TARDIS. No, flying the Doctor's TARDIS. Armed with a gun that fires 'time bullets'. Time bullets. Even the Doctor scoffs at that.

I think it is the Headhunter's abilities to do anything and have everything that annoys me. Nobody likes a smart arse and the Headhunter is becoming the ultimate in smartarses. She's going to be back though, that much is obvious but should she be. There's only so many times she can pop up with a lovely plan and the special equipment, fail and then flee without a scratch before there's something irritating about her.

I don't know perhaps that response was conditioned by the long day and the tube.

Perhaps it is because I don't like stories which revel in carnage and then expect us to forget it all with a smile and pick up again next week as if nothing much has happened. Even though I know Doctor Who couldn't possibly be as 'real' as that because everyone in it would either be suffering from survivor guilt, PTSD or be a sociopath. Death is everywhere and nowhere in Doctor Who. It can be the most moving moment in a Doctor Who episode or throwaway death of another minor cast member no one really noticed or cared about. It can be the focus of an episode - as it is in a way in both Resurrection and Revelation of the Daleks - or it can happen over and over again without much proper comment.

So I didn't enjoy Orbis and perhaps having thought about all of that the reason I didn't like it was I don't like it when the Doctor gives up. There's enough acceptance in the world as it is. I like my Doctor to rage, rage against the dying of the light. Not go gently (or McGuffiny) into that good night.

Or maybe I was just tired and grumpy.

You decide.
Posted by PatientCenturion at 11:42