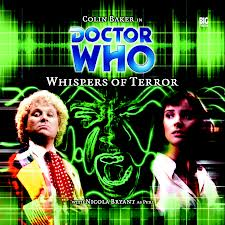 The Whispers of Terror is a fine piece of Doctor Who and an exceptional piece of audio drama. In my humble opinion. Well, not so much humble as just mine.

I recommend you listen to it on headphones to appreciate the full aural glory of it. Set in a Museum of Aural Antiquities this is one of those Big Finish stories that takes full advantage of its audio status to add atmosphere and power to the piece.

It helps that Colin Baker has a fantastically brilliant voice for audio and that in this story you can begin to get a glimpse of what the Sixth Doctor could have been if he hadn't been knee-capped from the off by that ridiculous costume and an indifferent to hostile BBC Management. This is what we might have got if the BBC had cared.

Yes, the Sixth Doctor is pompous, bombastic and loud. But he's also clever, witty and rather endearing underneath all the bluster. He's certainly keen to do the right thing. And for me he's always been Doctorish. Even in the television years I liked Colin Baker's performance. In fact despite my love for Tom Baker it was Colin Baker that made me a Doctor Who fan in the proper sense. I was always a fan of the programme but there was something about Colin Baker's Doctor that pushed me over the edge into the whole deep Doctor Who thing and wanting to go back to the past. It was during Colin Baker's era that I'd borrow those six or seventh generation VHS copies of Jon Pertwee and Tom Baker stories that were virtually unwatchable when I think about it now.

Colin Baker was also the first Doctor I ever actually met in the flesh. One of the advantages of living in High Wycombe. He was brilliant.

In a way it is one of the worst things about the BBC's treatment of Doctor Who in the Eighties is that Colin Baker who wanted to be the Doctor and could have been a great Doctor given the chance. The fact that Big Finish have given him and new lease of Doctor Who life can only be applauded. It gives people a chance to see what might have been and gives Colin Baker a bit of kudos he so richly deserves.

He's ably supported by Nicola Bryant as Peri, who seems to pick up on her old companion ways with no trouble at all. One of the problem with the television Sixth Doctor and Peri relationship was that it always seemed too hostile to be true. They were always bickering. There's some of that snark here but it feels like the kind of friendly piss taking that (my) good friends do to each other. There's more of a feeling of warmth.

Plus poor old Nicola doesn't get squeezed into the most revealing costume they can possibly find in order to keep the 'Dads' happy.

The Whispers of Terror features great performances from Lisa Bowerman as Beth Pernell, Matthew Breher as Visteen Krane, Peter Miles aka Nyder as Curator Gantman, Steffan Boje as Stengard and Nick Scovell as Detective Berkeley all of which compliment what's Colin Baker and Nicola Bryant are doing.

And that's all I'm going to say. If you've ever said 'I don't like Colin Baker's Doctor' you should really listen to this. I might be alone in this (and I'm not prepared to have THAT canon argument right now) but to me you can't judge the Fifth, Sixth, Seventh or Eighth Doctor's on their television work alone. They've be given extended lives by Big Finish. Extended and better lives in a way because with audio drama you don't need to suspend your disbelief when looking at an over-lit obvious set or a man in a monster costume. It's audio. You're own brain can do it for you.

Open you minds to the audio people.

You'll thank me in the end.