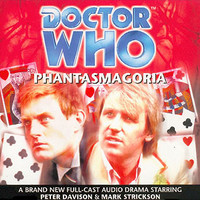 If The Sirens of Times was a 'getting the band back together' multi-Doctor taster then Phantasmagoria should be considered the first proper Big Finish release. One Doctor (the Fifth),  one Turlough in a four part adventure with cliffhangers, grand-guignol villains with suitably evil laughs and a suitably impressive guest cast.

Written by and featuring Mark Gatiss (as Jasper Jeakes) it's not a bad little story this. The setting is London, 1707 and we begin our tale at the Diabola Club where Jasper Jeakes, Edmund Carteret (Jonathan Rigby) and Quincy Flowers (David Walliams) are playing cards but Carteret is bored and is keen for something more adventurous. He flounces out but finds himself drawn into a game with Sir Nicholas Valentine (David Ryall).

Meanwhile in another part of town the Doctor and Turlough turn up in the house of antiquarian Dr Samuel Holywell (Steve Wickham). Their sudden manifestation into his home is explained by the Doctor who states they've come to deliver the TARDIS to him. As usual in the situation the Doctor ends up making himself at home.

And then....well then all sorts of shenanigans happen involving an alien murderer, a couple of other aliens, a Maid, a Highwayman by the name of Major Billy Lovemore and a lot of people disappearing.

It's all rather fun and it does have the right feel of the Fifth Doctor's era even if Davison (obviously) sounds a bit older and his Doctor a bit wearier. I could be reading too much into this but I do think Davison has taken the opportunity to change his performance as the Fifth Doctor. He's on record as saying he thought he was too young for the part when originally cast and that he felt he'd be better when he got older. Now he is older and he's doing something a bit different. It's rather good.

Oh and I like the way the story stays true to the Fifth Doctor's era by having him invite strangers - in this case Dr Holywell and Hannah - into the TARDIS again, which he seems to do on a semi-regular basis in his television stories.

I think Mark Strickson sounds a little rusty on this as if he's still feeling his way back into both acting and Turlough. I always liked Turlough as a companion though so as it is all eminently forgivable.

The guest cast is lovely.

David Ryall gives Sir Nicholas Valentine the requisite moustache twirling nastiness and has definitely mastered the 'evil laugh', which is essential in a part like that.

Mark Gatiss gets his teeth into Jasper Jeakes, which shouldn't be difficult as he wrote the script. David Walliams is good to as Quincy Flowers (and does a short turn too as Watchman Ned Cotton). I like Steve Wickham's Dr Holywell to who copes magnificently with the Doctor's explanations and you could see Dr Holywell joining the Doctor for a couple of trips in the TARDIS.

Julia Dalkin also does fine work as the maid Hannah Fry, whose importance to the story gradually becomes clear.  There seems to be a standard period drama maid voice that must be taught in drama courses up and down the country and Dalkin gives it a nice trot out in this story.

There's a little horror here to, especially in the final episode where we get to wonder in the alien space ship. Actually there's a few bits and pieces in this story where it reminds me of The City of Death, although nowhere near as witty.

Overall though this is a rather fun and a good introduction to the Big Finish oeuvre and a new old Fifth Doctor.

You can buy Phantasmagoria from Big Finish here for only £5. That's 'only' the cost of a pint. London prices obviously.
Posted by PatientCenturion at 08:32