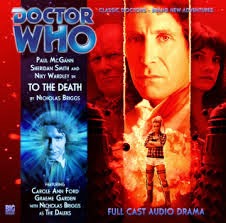 This is a bleak pair of stories. Bleak but brilliant. The darkest of ends to this season of Eighth Doctor stories. I'm not sure if you could get away with this amount of darkness in the television series but you can in Big Finish. Just.

To The Death is what we might now call a Doctor lite tale. He hardly appears until the end. What it does do though is explain what has happened on Earth in all its horror. There's been plague and invasion. Lucie Miller survives the plague. Just. She isn't unscathed but she finds herself both in the heart of the darkness and she finds herself in the heart of the rebellion against the invaders. With Susan and Alex, the Doctor's great-grandson.

To The Death feels like The Survivors* both in subject matter - the impact of plague and survival - and tone, although it doesn't have the depth of darkness that Lucie Miller has. It also begins to pull together all the threads going back to Death in Blackpool**. The Monk is here and has been heavily involved in creating this terrible situation and working to an agenda of his own. He's helped by Tamsin Drew, who hasn't quite seen through the Monk yet. Lucie and Alex start this story in Thailand as part of their world trip/gap year trip when the plague begins. Susan is here too and heavily involved in fighting off another invasion of Earth.

It ends on a wonderful cliffhanger that allows us to start Lucie Miller where the revelations and deaths come on remorselessly. The Monk's true complicity and venality is revealed. People die. People close to the Doctor. The first death is cold because it is done so casually. A person is eliminated by the Daleks casually as they have 'no function'. And neither the Doctor nor the Monk can stop it. 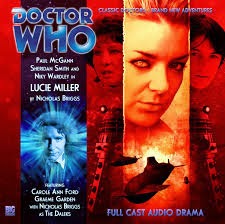 That death - and the Dalek's ruthless reaction to the North American rebellion - does seem to nudge the Monk's conscious. The Monk's greedy and unpleasant but his role in this story seems much nastier. It's like he's let his dislike of the Doctor's meddling get the better of him. At the end of the story you're not sure whether the Monk is repentant or not. He tries to talk to the Doctor but the Doctor is so angry and broken by this point that he's unwilling to listen. Indeed the Eighth Doctor's angry dismissal of the Monk's attempt to talk to him is brilliantly played by Paul McGann.

Graeme Garden does a fine job with the Monk again. Both Tamsin and the Doctor describe the Monk as a child at various points in this story and Garden does a fine job of getting across the Monk's wheedling attempt to avoid the truth of what he's done or his pathetic desire to be liked (and forgiven) by Tamsin. He is like a child but a child with a Time machine and the soul of a second hand car salesman. In some respects The Monk is the only comic relief in this story. Everyone else is pretty much played straight all the way through. The Monk's allowed to be funny, which I think makes his amorality even more shocking.

You'll notice I'm skipping around who dies and how in this story as I don't want to spoil it. The next death is even closer to the Doctor but is a more traditional sacrifice of sorts. The death comes as Lucie, Susan and Alex escape the Daleks in order to complete their mission to destroy the invaders plan. A mission that is itself a suicide mission. You know when this second death happens that it isn't going to be the last.

The last death is heart-breaking because it requires The Doctor to 'approve' it. It's the Doctor's responsibility, even if it is this persons decision. It's the final death in a trio of increasingly personal deaths that impact on the Doctor. You can see why this was originally going to be titled 'Victory of the Daleks' before the BBC nabbed - and wasted - that title for their television episode. It certainly deserves that title. Yes, the Dalek Invasion of the Earth 2.0 is defeated but at a terrible cost both to the Earth itself and the Doctor personally. He's an angry man at the end of this story (and you could imagine the post Lucie Miller Eighth Doctor becoming a War Doctor without the need to regenerate into John Hurt. I wish Steven Moffat had thought of that, even if it did mean losing the wonderful John Hurt War Doctor. I might re-boot this all in my head and pretend that's what happened. Or not.)

This story is packed full of excellent performances. Even John Banks as Seb is great and that's quite a small part but key because he's one of the few 'ordinary' humans in this story. Almost every other speaking part is a key character or a Dalek or voiced by Nick Briggs.

Carole Ann Ford's Susan is both the same character as the one who left in The Dalek Invasion of Earth and the older, post-Invasion version. [SPOILER FOLLOWS] In fact my only quibble with this story is the focus on The Doctor's grief, not Susan's. She should be equally broken but we're left to respond to the Doctor's anger. Which seems unfair. Especially as the Doctor goes into the TARDIS at the end and leaves her back on Earth with hardly a word to her about how she's feeling. It's rather brutal in a way.

But really great though Niky Wardley is as Tamsin, Jake McGann is as Alex or Graeme Garden is as The Monk I praise both McGann and Sheridan Smith above all of these. McGann's wonderful. Sheridan Smith though manages to give us a version of Lucie that we haven't seen before - almost broken and pessimistic. Then bringing the old Lucie back as the story builds to its climax. Her anger at The Monk's revelation of his role in the deaths of the rebels builds to scorching point. This pair of stories is really all about Lucie Miller and what she's become travelling with the Doctor and Sheridan Smith does a stonking job of bringing her too life.

These two stories are a fine conclusion to a season of Big Finish Eighth Doctor stories that I'm almost going to say is one of the best seasons of Doctor Who in the programmes history. It's a rolling series of tests of the Doctor's morality and character.

Actually my final comment should revolve around the Daleks. These two episodes really bring home the genuine threat that the Daleks present. They are cold-blooded killers. Instead of crying exterminate and letting their potential exterminatees escape they just kill people. And instead of the Doctor winning with only minimal losses this time lots of people die and some of them are close to the Doctor. He does win but it is a Pyrrhic victory.

I can't recommend these two episodes highly enough but in the words of the Capaldi Doctor you'll be heading 'Into Darkness.'

**Actually you can argue going back to The Zygon Who Fell To Earth and links to the Sixth Doctor story Patient Zero, which I haven't heard. Just thought you'd like to know it.
Posted by PatientCenturion at 08:50