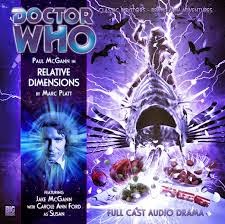 Relative Dimensions by Marc Platt was released in December 2010 so it obviously has to have a Christmas theme to it. The Doctor feels that he owes Lucie a good Christmas to make up for the rather unpleasant one that we heard back in Death in Blackpool and Lucie, being a sucker for Christmas, agrees. Even if she still isn't sure about how she feels about the Doctor.

The Doctor wants a family Christmas so decides to pick up Susan and Alex on the way. Now Lucie has no idea who Susan and Alex are so is surprised when Susan refers to The Doctor as 'Grandfather'. The Doctor's got plans though. Plans for Alex.

There's also the problem of the giant pan-dimensional electro-fish thing that's got into the TARDIS because this being Doctor Who nothing could possibly be simple. This fish, which Susan picked up on Quinnis*, turns out to be doing a lot of damage to the TARDIS and to its fledershrew inhabitants. But whilst this BIG FISH is a problem it isn't evil or anything. It's just doing its thing. It just wants to go home, which makes for a pleasant change.

The BIG FISH is really just a McGuffin though for two things. Firstly to get a chance to have a wonder around the TARDIS and get a feel for the Doctor's nostalgia and his hopes whilst secondly giving us something to play out the Doctor's relationship issues with Lucie, Susan and Alex.

The Doctor's relationship with Susan has changed, obviously. She's less concerned about him - after all he's younger than her grandfather was and less in need of mollycoddling - and more concerned about Alex. It's because of that she gets angry with the Doctor when she discovers that the TARDIS has taken off. She's also a bit peeved with the Doctor's plans to take Alex off for a spin around the Universe, even if she comes around to accepting it. The Doctor sees Alex as his heir. One day the TARDIS will be Alex's, except Alex is - according to a sneaky DNA test conducted by the Doctor - only 7% Time Lord so I'm not sure how that will pan out. I also love the way Marc Platt manages to skim over the 'is Susan a Time Lord' stuff using a few throw away lines.

Meanwhile Alex is finding the whole thing both fun and frustrating. When he finds out that the Doctor has prepared a room for him then he gets a bit miffed about people 'making plans for him' but he and the Doctor bond well enough towards the end as they work together to organise a solution to the BIG FISH problem.

Lucie meanwhile is still a little awkward around the Doctor. She hasn't slotted back in comfortably, which explains why she decides to stay behind with Susan and Alex at the end. Alex wants to go off on a 'Grand Tour' to see the architecture that's left in and around Europe and Lucie's going to go with him.

So in the end, despite all the family Christmas festivities, the Doctor ends up alone. Again. The final little moments are rather nicely done. There's a choir singing 'Silent Night' and the Doctor is going through the presents he was going to give Lucie and finally he wishes himself a Happy Christmas - and in a nod to The Feast of Stephen - to anyone out there who might be listening.

It's not the most action packed Big Finish story ever and it feels like a little calm before the storm. We know there are only three stories left of this season and you get the impression that this one is the light-hearted one before it all kicks off. I could be wrong, of course. I often am.

What makes this so enjoyable though are the four fantastic performances from Carole Ann Ford, Sheriden Smith, Jake McGann and Paul McGann. Jake seems to have inherited his Dad's chilled out acting style, which is sweet. It's Paul McGann though that I think steals the show - although as he is the star of the show I'm not sure he can steal it but hey-ho - with a lovely performance. Again. Particularly in the final scenes when he's left alone.

I'd put McGann high on my list of favourite Doctors if I had one. I'm one of those people whose favourite Doctor tends to be the one I'm watching at the time but with a nostalgic fondness for Tom Baker because he was the first Doctor I remember. But even allowing for that the frustration that McGann's television appearances as the Doctor are limited to The TV Movie - which can't even be arsed to give itself a title - and The Night of the Doctor is always rather frustrating.

In the end McGann, more than any of the other Doctors, is a Big Finish Doctor and perhaps all the better for it. Or not.


*Quinnis is mentioned in a throwaway line in a Hartnell episode by Susan. It's an unseen adventure, which by shear coincidence was turned into Big Finish Companion Chronicle 5.06 released in December 2010 and written by...Marc Platt. You can buy Quinnis and give that a listen if you feel so inclined. I've not heard it yet myself. There's a lot of Big Finish to get through you know. A lot.
Posted by PatientCenturion at 03:22