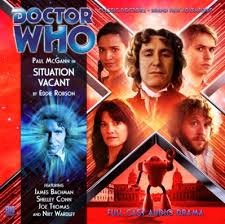 Situation Vacant is rather silly. At least on the surface. Underneath there's hints at something darker going on. It's Doctor Who does The Apprentice and the Doctor gets to be Alan Sugar.

Summoned by an advert from a time traveler looking for a companion four disparate people turn up in a hotel room: Hugh (James Bachman), Asha (Shelley Conn), Theo (Joe Thomas) and Juliet Walsh (Niky Wardley). They're joined by the Doctor who appears to have set a couple of tasks for the team to perform in order to select a companion. These situations are confusing and dangerous. And all is not what it seems. There are hidden agendas and secrets beneath secrets.

As well as one of the best ordinary people in a Doctor Who story since Griffin the Chef in Enemy of the World Rachel, the Polish Hotel Manager (played with aplomb by Joanna Kanska.) Rachel manages to take everything that happens in the story without batting an eyelid and is happy enough with her life not to be swayed by the Doctor's offer of a trip in the TARDIS. It's a nice touch.

Every character, including the Doctor isn't quite what they seem. And neither is the situation into which they find themselves. Someone is playing games with the Doctor and, at this point, we don't know who that person is. What we do know by the end of the story is that they're also a traveller in time and space looking for a companion and that they palmed off the four most difficult candidates on to the Doctor. Or the Doctor stumbled across them. On or t'other.

It's slightly hard to review this story without spoilers. Suffice it to say it rattles along at a fair old pace, it's got two linked mini-adventures inside the bigger 'what the hell's going on here' story line and we get to meet the Eighth Doctor's new companion, Tamsin Drew.

It's not the best Big Finish story but it certainly has an entertainment and amusement value depending of your tolerance for the light-hearted in Doctor Who. I know some Doctor Who fans frown upon that kind of stuff. Me, I tend to quite like it.

The performances are all rather good. James Bachman's Hugh seems like your typical upper class twit of the year but actually there's little bits 'n' bobs of subtly within the performance and an ability to change tack that is rather good. Joe Thomas's Theo isn't the most exciting character but the performance is fine. The same goes for Shelley Conn and Niky Wardley. I particularly like Shelley Conn's shift in character when...well...when that thing happens and then some other stuff happens. You know. Spoiler stuff.

The new companion does come out of the blue a bit but is still probably introduced with more character than Dodo is at the end of The Massacre.

There's also the mystery of who did all of this and who ended up being selected as their travelling companion to be solved. It isn't solved here and the Doctor can't even be bothered to find out at the end, which I quite like. I suspect though this will play out over the course of the next few stories. I can't see it not, although it would be mildly perverse of Big Finish if they didn't. Or if it gets sorted out ten seasons down the line when everyone's forgotten all about this story.

Anyway I enjoyed listening to this on my homeward bound commute. It helped the journey fly by and if nothing else that's something to be grateful to writer Eddie Robson about, which is praise not to be sniffed at.
Posted by PatientCenturion at 11:10