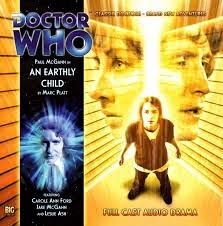 An Earthly Child is one of Big Finish's special releases. It's set on Earth. Thirty years have past since the Dalek Invasion and Susan Campbell is calling out to the Universe for help to re-build the Earth. An Earth that is suffering from a global post-traumatic stress disorder. They - we - are afraid of more aliens. Afraid of technology. Earth seems to be marching backwards into the future.

Susan's actions draw the attention of the Guldresi and another mysterious traveller in time and space: The Doctor.

I enjoyed it. It's an interesting postscript to The Dalek Invasion of Earth. It's surprisingly realistic. This feels like how Earth might react post-invasion.

That's certainly the case for Alex Campbell. He's Susan and David Campbell's son. He's half-Gallifreyan. On his mother's side. On heart. And he hates aliens. He's caught between the machinations of his mother and of Faisal Jensen of Earth Unity but eventually he tries to find his own way, despite Susan's intentions to send him off to Gallifrey for a proper education. He's played by Jake McGann, who is Paul McGann's son, which is interesting. It's a good performance as Alex struggles to come to terms with what is happening and who it is. We don't know - at this point - how things will end but it seems a fairly realistic take on what might happen.

Susan is played by Carole Ann Ford. Obviously. It's nice to have a Susan story forty years later that gives her something useful to do. This isn't the Susan of the television series. Obviously. She's older. She's a mother. She's stuck on a backwards planet with nowhere to go. It's almost like the Third Doctor's exile but with the additional burden of a family. She's very good. I particularly like the scene when she's first re-united with the Doctor in a police cell in Bristol. It's rather sweetly done.

The Doctor's on his own this time. So I've slotted this review in here assuming he's just left Lucie Miller at the end of Death in Blackpool. I'm not sure if this is correct or not. But it's my blog, my rules etc.

Paul McGann's brilliant as usual and there's something about his performance now that makes it seem like he's more comfortable with it. Happier being the Big Finish Eighth Doctor. Occasionally - back in some of the Divergent Universe stories for example - he did sound a bit like his heart wasn't in it as much. Perhaps I'm wrong.

Also worthy of applause is Leslie Ash as Marion Fleming. Fleming is a teacher at Bristol University. She's teaching Alex Campbell and ends up assisting the Doctor. It's a nice performance.

The story is written by Marc Platt, who seems to have an interest in the Doctor's family life going all the way back to Lungbarrow, and I like the story, which I think is about fitting in under all its science-fiction pretensions. It's not the most action packed of tales. It's about politics and families so there's a lot of talking* but it's all rather enjoyable.

And it is nice for the Doctor to finally pop back to see Susan, even if it has taken him a long time to do so.


*I KNOW it is audio so it is bound to be wordy but there's wordy and there's wordy. Pfft. I know what I mean. Even if you don't.
Posted by PatientCenturion at 00:48