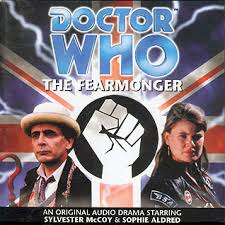 The Fearmonger, which was released in February 2000, is the Seventh Doctor and Ace's first entry in the world of Big Finish. Sylvester McCoy had already appeared in Sirens of Time but without a proper companion. Now one of my favourite Doctor - Companion teams is back, which is nice.

Written by Jonathan Blum, The Fearmonger is set in a near-contemporary Britain where the right-wing New Britannia party, led by Sherilyn Harper  (Jacqueline Pearce), is on the rise. Praying on the fear and hostility of the British to immigrants she's looking forward to a successful election campaign. If she survives the assassination attempts of course.

Her attempted assassins include Walter Jacobs (Mark McDonnell). It's Walter who will be in and out of the story all the way through. Edgy, frightened and hysterical Walter Jacobs isn't the easiest of people to hang out with.

Later we get to meet another gang of would be assassins headed up by the Antipodean sounding Alexsandr Karadjic (Jack Gallagher). Another spanner in the works as the Doctor attempts to prevent full-scale riots. And worse.

Being Doctor Who, of course, there has to be an additional complication. The Fearmonger itself. A creature of vaguely unknown origins - although the Doctor speculates a little as to where it popped up from - it breeds on strong emotions and helps encourages them. And it appears to have occupied Sherilyn Harper.

A Big Finish story with a nice contemporary resonance.

The politicians and their aids are, of course, cynics to a woman and there is a part of me that would like to see a politician - especially the right-wing ones I don't like much - less cynically. However the presence in this story of Roderick Allingham, who is Harper's aid, makes that virtually impossible. Partly because he's written up as the arch-political fixer, a Peter Mandelson manque, but also because he's played by the magnificently oleaginous Hugh Walters.

Hugh Walters has appeared in three Classic Doctor Who stories and each appearance was bigger and better than the first. His best being Vogal in Resurrection of the Daleks. There he is assistant to businesswoman and (sort of) unwilling Davros accomplice Kara (Eleanor Bron). In The Fearmonger he is a less camp version of Vogal: dry, cynical and Machiavellian and it is perfect casting. He could almost be an escapee from the Pertwee era of difficult civil servants and politicians.

In fact there's something a little Pertwee about the whole story now I come to think about it. Allingham and Harper constantly refer to the Doctor's 'United Nations connections'.

Overall then it is the performances that make this story. Jacqueline Pearce - whose voice I could listen to for ever - is great and I've already talked about Hugh Walters. Mark McDonnell makes Walter Jacobs sound so fragile that you'd want to make him a cup of tea and give him a hug in real life. Plus there's Vince Henderson's 'shock jock' Mick Thompson, who has the right level of annoying 'I call a spade a spade' smart arsed hostility to actually make you think you've heard him presenting a genuine radio programme.

But best of all are Sophie Aldred and Sylvester McCoy as Ace and the Seventh Doctor. Sophie's great in this and there's a brilliant scene where she has a go at replicating the Doctor's speech to the snipers in The Happiness Patrol with what can only be described as less than successful results. Lovely.

Then there's Sylvester. He's simply magnificent. The darker and more devious Doctor of the Cartmel 'Master Plan'. He's got a habit of just appearing in scenes to the discomfort of those involved and in this story - naturally - people are afraid of him and his reputation. His best moments though are at the end. His quiet discussion with Harper and then the final tense scenes with Ace. McCoy's always best in those quiet moments - like Matt Smith. Then you get an insight into how scary the Doctor might actually be.

So to get this blog finished so I can start doing some actual work I would say The Fearmonger is definitely worth a listen but it's not a Big Finish Classic. However if you like the Seventh Doctor and Ace you will almost certainly enjoy this.