The Land of the Dead [5th Doctor & Nyssa] 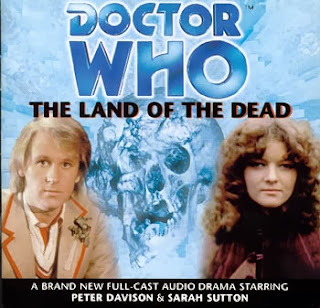 One quibble excepted I really enjoyed The Land of the Dead. I particularly enjoyed the Fifth Doctor and Nyssa partnership. One of the problems with the televised Fifth Doctor is that he is occasionally overloaded with companions and as a result none of them get to 'breath' much. Sarah Sutton's Nyssa in particular gets swamped by the more belligerent Tegan and the needier Adric. So on occasions, such as Kinda, she gets stuck in the TARDIS with a glorified headache.

Which is a shame as I always liked Nyssa and not just for her skirt dropping Terminus but because I always felt there was an interesting story to be told and that she and Davison had a really good chemistry.

So one of the strengths of this is that it is just the Fifth Doctor and Nyssa.

Also Nyssa's back story informs her responses to what's going on and in particular her scenes with Tulung (Neil Roberts) are made all the stronger for that and there's a rather moving moment - which I'm going to remember inaccurately - when they are talking about tradition and science and looking up at the sky and seeing the whole universe and death. Sarah Sutton plays it beautifully too.

I really like Peter Davison's 'new' take on the Fifth Doctor too. It's interesting that Peter Davison's stint with Big Finish is less often praised than both Sylvester McCoy and Colin Baker's. I think that's done to how the Sixth and Seventh Doctor's eras on television are perceived and that their Big Finish careers have taken on an almost a redemptive quality. So that anyone who thinks Colin Baker is a bad Doctor just needs to take a corrective course of Big Finish adventures to recover their senses. Ditto with McCoy. However Davison's take on the Doctor is generally well-received, perhaps with the exception of its own stars*, and as a result Big Finish is seen more as a continuation than a redemption but I think there's more going on here.

I've gone over some of this ground in the review of Phantasmagoria but I think that the Big Finish Fifth Doctor is the Fifth Doctor Peter Davison wishes he could have given us on television. It's pretty well-known that he thought he was too young for the part when he was cast originally and now he's the right age. Perhaps I'm reading too much into all of this but that's my right as a citizen of a post-modern universe.

To sum up all of that: Davison's brilliant.

The Land of the Dead is set in Alaska and would be as bleak as the environment if it wasn't for the dry humour of architect Monica Lewis (played with panache by Lucy Campbell) whose main reaction in a crisis is to abandon her internal monologue in favour of an avalanche of sarcastic verbiage. She and the Doctor spend quite a lot of time together and it's a finely played relationship. In fact Monica makes you think about Tegan and how much better Tegan would have been if she'd been written more like Monica.

There's not really a villain in this story. There's a slightly mad millionaire called Shaun Brett (Christopher Scott) who is really in need of some help to get over his father's death more than anything else and there's an out and out monster (which had this been a Davison television adventure would have been a sorely disappointing man in a terrible costume : see The Arc of Infinity and The Caves of Androzani for examples) which is limited in intelligence but dangerously hungry.

In fact you might argue that a theme in this story is about leaving the past alone. Digging up the rocks brings back a rather unpleasant monster from the past, digging up the past drives Shaun Brett and Tulang almost insane.

Whilst another theme is the clash between tradition (of family, tribe or society) and science. The clash is most obvious in Tulang and Gaborik (Andrew Fettes) who are Native Americans, of the Kuyokon Tribe. The use of Native Americans as a kind representation of lost traditions, a lost connection to the land and a lost wisdom is a bit of a cliché, which is my minor quibble with the story. Perhaps recent discussions with friends about the use of Nazi's in Doctor Who have made me more focused on this line of thinking but there's something a little off with it. If Doctor Who's Nazis come out of the Indiana Jones tradition, then their Native Americans come out of the X-Files.**

But perhaps I'm being overly harsh. In fact I definitely am but I think one needs to be careful to avoid turning a whole complex group of people into a short-cut for an idea. Or just a plain cliché.

That really was my only quibble.

*There's nothing more depressing than listening to some of the Davison era DVD commentaries as the cast slag off their own work.

**For an interesting introduction to the perceptions of Native American culture I recommend Rich Hall's TV documentary 'Inventing the Indian'
Posted by PatientCenturion at 05:26